Major achievements in the four years of Modi government

1. Crackdown on black money and corruption

Narendra Modi government claims to have taken  stringent action against coruption and black money. Recalling his historic announcement on demonetisation of all 500 and 1000 rupee notes to crack down the flow of black money, PM Modi said that that at present the nation is going from 'Kala Dhan' to 'Jan Dhan' i.e. from bad governance to good governance.

"Three thousand raids were conducted by various agencies and undeclared income to the tune of Rs 73,000 crore was unearthed. Tough rules against black money have sent shivers down the spines of many who have come under one platform," Modi said in Cuttack.

The government also claimed that legislations such as the Black Money (Undisclosed Foreign Income and Assets) and Imposition of Tax Act and the Benami Property Act were brought in to avoid corruption.

According to the statistics put out by the Bharatiya Janata Party, India's GDP growth has seen a stupendous growth of 31 per cent as compared to that of the world (four per cent) over the past years. 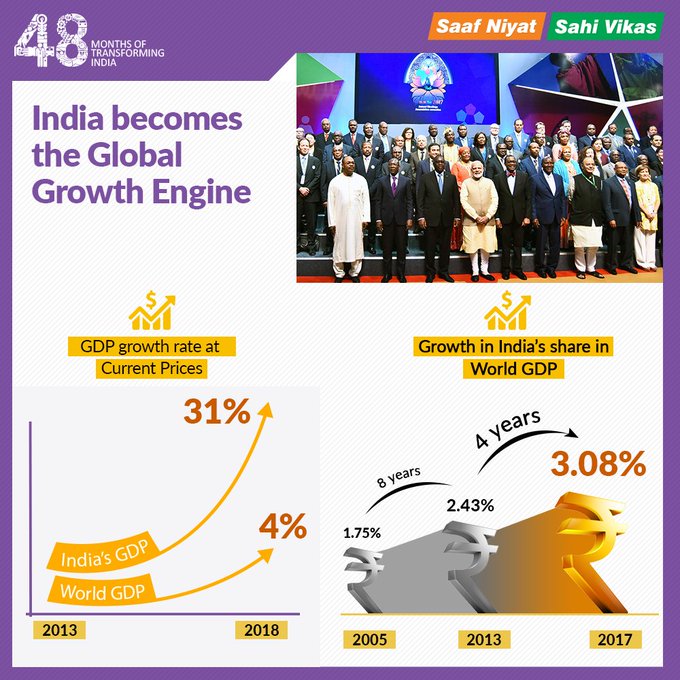 Under this scheme more tham 3.8 crore Below Poverty Line  (BPL) families were given free LPG connections.

The government launched the Deen Dayal Upadhyaya Gram Yojana (DDUGJV) on July 25, 2015. Today, thanks to the successful implementation of the scheme, no village in India is in darkness. Also the SAUBHAGYA scheme launched by the government ensured that every household is electrified. 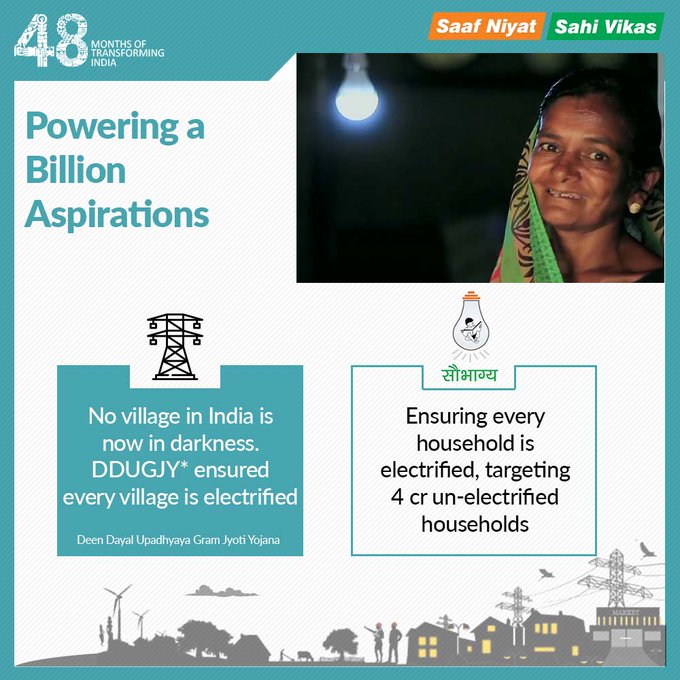 Heralding a revolution in sanitisation- this was a prime motive of the Modi governement when it ascended to power in 2014.  Under the Swachh Bharat Mission, over 7.25 crore toilets were built. During the past four years the sanitation coverage in the country went up from 38% in 2014 to 83% in 2018.

"Till 2014 39% of the population had access to sanitation facilities, today the figure is over 80%. From independence till 2014 there were around 6 crore toilets in the country but in last four years 7.5 crore toilets have been made", said PM Modi during his address in Cuttack.

For the welfare of the farmers, the government implemented a "mutli-faceted focus" on doubling farmers' income, besides distributing 12.5 crore soil health cards and insurance under the PM Fasal Bima Yojana at nominal rates, according to the BJP

In the area of infrastructure, BJP chief Amit Shah said projects worth lakhs of crores of rupees were implemented "without a scam". This includes 53,000 km road worth Rs 5.35 lakh crore under the Bharat Mala initiative. The largest tunnel and the largest bridge in the country were built by the Modi government, which has also initiated bullet train project on Mumbai-Ahemdabad route, he said.

Addressing reporters on the occasion of the Modi government's fourth anniversary, BJP president Amit Shah said that through the 2016 surgical strikes conducted by the Indian Army across the Line of Control (LoC), the government exhibited its political willingness to take on the country's adversaries. "In a historic first, India carried out surgical strikes showing a new mettle", he said.

According to amit Shah, ensuring affordable and quality healthcare across the country has been one of the campaign promi

10 per cent reservation for general category: Who all will benefit

According to government sources, this 10 per cent reservation will apply for all communities and caste is not going to be a criterion for eligibility

Major achievements in the four years of Modi government

In the wake of Assembly elections in Rajasthan, BJP has released a second list of 31 candidates. In its second list, BJP has fielded new faces in these seats by cutting tickets for 15 MLAs and 3 ministers. It will be interesting to see n